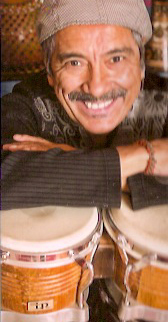 Raul is from the port of Callao, Peru, a hub of musical innovation and the fusion of African and Spanish music styles. Raul began playing the Peruvian cajon on the streets of Callao, a traditional instrument that is the key to the Afro-Peruvian and coastal music styles. The cajon is a wooden box that became a drum in the hands of Peruvian musicians, denied the use of African instruments by the Spanish masters and later marginalized in the post colonial Peru. As a boy he followed the street musicians through the streets of this rough port town learning the marinera, zamacueca, festejo, lando and other Peruvian rhythms from the masters who went from bar to bar and played the back alleys of Lima.

As Raul matured as a musician he worked played in local radio orchestras and performed with many of the legendary Peruvian artists before moving to the USA in 1973. He arrived in the Bay Area during the post-hippy jazz renaissance and worked with jazz-rock jam bands organized by Grateful Dead collaborator Merl Saunders. In the Bay Area he became an important figure in the music scene working with George Duke, Mad and Eddie Duran, Denise Perrier, Lady Memphis, Frank Jackson, Eric Schifrin, The Bobs, Pedro Vargas, Piero, Susana Baca, Eva Ayllon, Cecilia Bracamonte, Houston Persons, Pete Escovedo and The Oakland East Bay Symphony and many others.

CON ZAPATO Y TODO, means “shoes and all”, this refers to the hybrid Afro-Peruvian music, that brings together the few remaining strands of African music in Peru with New World mixtures that emerged as a vibrant force in the 1960’s. This CD reflects this “shoes and all” mixture of Afro Peruvian rhythms with jazz harmonies and melodies, looking at jazz through a Peruvian prism that refracts the sounds and creates interesting textures on well worn jazz classics, like Stella by Starlight and Black Velvet. The musicians reflect the diversity of the sounds featuring Peruvian heavyweights, veterans of Susana Baca’s band, David Pinto on bass, Juan Medrano “Cotito” on cajon and Ernesto Hermoza on guitar with the esteemed guitarist and arranger Santiago “Coco” Linares. The recording is crowned by the presence of the diva of Lima’s musica criolla, Cecilia Bracamonte and Peru’s top sonero, Carlos Mosquera. They are joined by Latin jazz legend Jerry Gonzalez on trumpet and Argentine guitar virtuoso Hugo Wainzinger.

For this CD Raul enlisted the help of veteran producer, Greg Landau (Susana Baca, Patato Valdes, Bobi Cespedes, Amadito Valdes, Maldita Vecindad, Pamela Rodriguez), who has produced six Grammy nominated Latin CD’s. These songs represent the beginning of an interesting voyage for Raul as he launches his Afro Peruvian craft into a sea of musical possibilities.